Batalvi’s children were brought to Qadian by force

Intro
Syed Muhammad Hussain Batalvi was a great friend of MGA and then later became a major enemy.  However, after MGA died, Batalvi seemed to have buried the hatchet, he was allowed to write an article in the ROR in 1910.  Lahori-Ahmadis sources tell us that it was Dr. Mirza Yacub Bag who found 1 son of Batalvi and brought him to Qadian for free food and shelter (See Mujadid e Azim, online abridged version, see page 798).  We have conflicting stories however, the Qadiani’s tell us that Batalvi sent his children, whereas lahori-Ahmadi sources tell otherwise.

By 2010
Ahmadiyya leadership has kept in contact with some grandson’s of Batalvi and seem to have bribed them into accepting Ahmadiyya.  They claim to be the off spring of Shaikh Saeed Ahmad, who was a son of Batalvi.

“Muhammad Husain had two wives and seven sons and three daughters. He himself says that they had all turned out to be thoroughly wicked and irreligious. They severed all connection with their father and some of them even conspired to kill him (Isha‘atus Sunnah, Vol. 22 No. 8, pp. 225, 226). In 1910 Muhammad Husain complained of his children’s wickedness to the Editor of Al-Hakam Qadian, who advised him to send the two younger ones to the Qadian school. He accepted this advice and sent them to Qadian.

When his friends came to know of it he had to write in defence in the Ahl-e- Hadith, Amritsar, dated 25-2-1910 that the boys were well looked after and that their religious beliefs were not being interfered with. But the enemies of MGA could not bear it, so they pressed Muhammad Husain to get his sons out of Qadian. At last he yielded and sent them to Rupar where they drifted into ways of profligacy. On December 1, 1912, the two boys were brought to the Anjuman Ahmadiyya, Lucknow, in a miserable state. There was a complaint and the matter came to the notice of the police and the court. The Ahmadis of Lucknow tried to wean them from their wicked way of life but with no success.

Note by Hadrat Maulana Jalal-ud-Din Shamsra: Hadrat Amirul- Mo’minin Khalifatul Masih IIaba says: I believe that one of the interpretations is the following. Two sons of Maulavi Muhammad
Husain Batalvi came to Qadian, studied in the seminary school, and took a pledge of my allegiance. Later, they showed some weakness, but it was a moral problem, not a problem of religious belief…. Thus the prophecy of the Promised Messiahas was fulfilled in my person and also fulfilled was the dream that I saw about the wrestling match which had informed me that ultimately Maulavi Muhammad Husain would join us.
[al-Fadl, vol. 32, no. 110, May 12, 1944 p. 2] 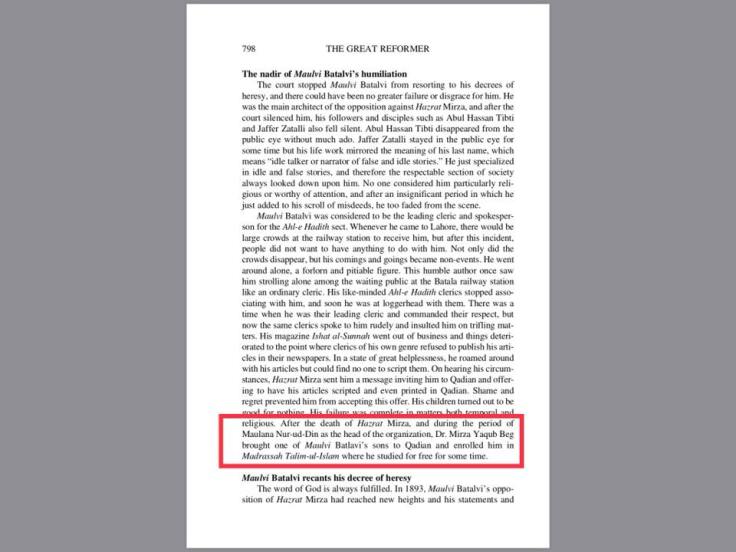