Intro
Ahmadiyya leadership orders its mullahs to lie on their behalf, on behalf of the Mirza family that is. To this end, the Ahmadiyya mullah team has been openly lying, brainwashing simple Ahmadis and financially exploiting its own people. Further, they have went back to all of the literature and deleted and edited as they deemed fit. In the case that I present in the below, Ahmadiyya leadership purposely left out the FACT that MGA met with Lekh Ram, as he visited Qadian, and he seems to have stumped MGA with a question and proved MGA to be an idiot.  Remember, Noorudin, Abdul Karim, Irfani and Mufti Muhammad Sadiq werent in Qadian to help MGA at this time, they came later, after 1890. Finally, it should be noted that this story was never presented by an Ahmadi authors.

In 1884, Mirza Qadiyani wrote letters to Hindu and Christian Missionaries to come to Qadiyan, stay there for one year they will witness the sign of my prophethood during this period if no such sign witnessed by them, he will pay Rs.2400.00 to such person ( @ Rs200/- per month).

Pandit Lekhram responded to show his willingness to visit Qadiyan. Since Mirza wants this stunt only to prove himself and gain popularity, he created many hurdles to stop him from coming to Qadiyan. Like he sent him a list of strict terms & conditions which include demand of financial guarantee from pandit. He also used delay tactics , yet Pandit Lekhram did not bother, crossed all barriers and reached Qadiyan.

His hurricane arrival at Qadiyan took Mirza by surprise. One day Mirza was discussing the terms of his stay at Qadiyan to witness a sign, the discussion diverted toward definition of MOJIZA or
SUPER NATURAL things. LEKHRAM SAID SUPERNATURAL means something which breaks the law of nature. Like, he said, knife is meant to cut , fire,s purpose is to burn And a tree can not walk. Now if you r a truthful prophet you show me some thing where knife do not cut , fire refuse to burn and tree start walking on your permission. IF U SHOW ME ANY OF THIS I WILL EMBRACE ISLAM BUT IF U FAILS TO DO THIS YOU MAY ACCEPT HINDUISM.

Mirza refused to do this by saying such definition of MOJIZA , supernatural is not in Quraan. Lekhram SAID the words MOJIZA HAS NOT BEEN MENTIONED IN QURAN ALTOGETHER. MIRZA INSISTED THAT WORDS IS THERE IN QURAAN. LEKHRAM SAID BRING THE Quraan, Quraan was brought ! Lekhram handed it over to Mirza and said ok show it to me where this word MOJIZA appears in Quraan. Mirza flipped the pages of Quraan over and over but failed to find any such words. 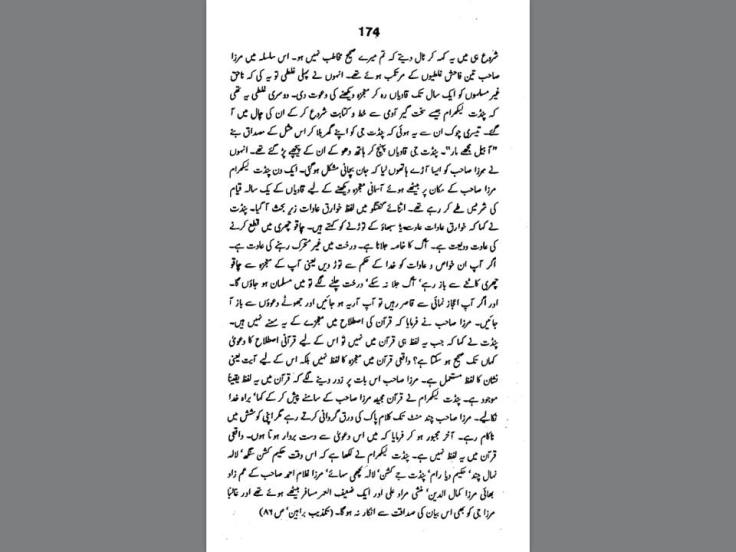 Lekh Ram’s correspondence with MGA in 1893

Lekh Ram traded death prophecies with MGA in the 1880’s

A Murder in British Lahore – Closing the Case of Lekh Ram

In 1901, after banishing Lekh Ram to hell, MGA changes his hell theory