Intro
MGA and his team only did written debates, this was how MGA got help from his team of ghost writers and debaters.  In today’s research, we have uncovered new data in terms of the debate that MGA lost in 1891, and at his own house in Qadian.  Dard mentions this incident on page 297-299.   Maulvi Muhammad Bashir Bhopali mentioned 4:159 as a main argument that Esa (As) was still alive.

In October 1891 When Mirza was in Dehli and had recently escaped from the debate with Molvi Nazir Hussain in the Jamia Masjid Dehli, Molvi Muhammad Bashir Bhopali who was a high ranking Scholar and one of the disciples of Molvi Nazir, challenged Mirza Ghulam Qadiani for a debate.

Mirza Bashir Ahmad MA son of Mirza Qadiani in his book Seeratul Mahdi Volume 2 at page No 90-91 giving the accounts of this debate, writes:- “after 3 or 4 days of Jamia Masjid incident, Hazrat Masi e Moud had a debate with Molvi Muhammad Bashir Bhopali at his house (the house that MGA was staying at in Delhi). It was decided that both parties would exchange 5 papers of arguments and answers with each others but when Hazrat Masih e Moud saw that Same old arguments which were refuted earlier, were being repeated by Molvi Muhammad Bashir and no new argument is being advanced from the opponent, he ended the debate on 3 papers. Hazrat Masih e Moud did not care the humiliation and mockery of the opponents. This debate has been published with the title of Al Haq Dehli. Readers can see Hazrat sb ended the debate when Molvi sb had exhausted all his arguments and he was only doing repetition.”

On the contrary, the actual detailed accounts of this debate has been published in the contemporary Magazines , Al Haq Assarih and Tarikh e Mirza pages 42-44. This has been compiled by Muhammad Rafiq Dilawari, author of Book Raees e Qadian, pages 341-344. Author RQ says that some body sent the Ishtihar dated 6 October 1891 published by Mirza Qadiani, for scholar of Dehli, to Molvi Muhammad Bashir Bhopali as well, who sent a reply to the Ishtihar to Mirza Sahib whereby accepting his all terms and conditions for debate. The debate was agreed on the following terms and conditions:-

1,Government security would be provided.
2.It would be a written debate. Each party would write his arguments in the session and would hand over signed copy to other for reply.
3. Issue of Life of Hazrat Essa a.s would be taken up first. If Life of Essa a.s is proved Mirza would leave his claim of Masih. And descending of Masih a.s would be discussed.
4. Any party quitting the debate without its final settlement, would be considered as the loser one.

However on arrival of Molvi Muhammad Bashir in Dehli, Mirza Qadiani in violation of earlier agreed terms and conditions added the new conditions that :
(a) the burden of proof would lie on Molvi Muhammad Bashir because he would be a claimant of life of Essa a.s.
(b) the debate would be held at Mirza,s residence with no public proceedings would be held.
(c) In all 10 persons would be allowed to participate. However Molvi Abdul Majeed and Molana Muhammad Hussain Batalvi would not be allowed under any circumstances.
(d) Debate would be limited to 5 papers only.

Although this was a violation of earlier terms and conditions yet Molvi Bashir accepted it. Molvi sb went to the House of Mirza and he wrote Five arguments in support of Life of Essa a.s on paper read it to the audience there and handed over a signed copy to Mirza Qadiani. Instead of writing reply in the session Mirza did not write its reply and said Ok you may leave now to come at 10 o’clock tomorrow. but when they reached next day to receive reply Mirza did not come out of house and send some one telling that the reply is not ready yet and you may leave for now. Molvei sahib will be informed as soon as the replies are ready. Peoples agitated this attitude to be a violation of the terms and condition but Mirza remained adamant. At 2 o clock they were again called by Mirza and a reply was handed over with the directions that rejoinder may be prepared at home and be delivered to him once it is ready. It continued like this for five days wherein 3 papers were exchanged. On the sixth day Mirza Qadiani announced that his father in law is seriously ill and he was quitting. Peoples said this is against the law which he himself had laid down but Mirza did not agree. Since Molvi Muhammad Hussain Batalvi and other ulema knew his level of learning, they had prepared a condemning article which was read over in Mirza, s presence peoples laughed at him made a mockery of him still it did not make any impact.

Actual reason for Mirza,s escape from debate was that as a claimant of Masih, Mirza had created two walled defence first wall being Death of Hazrat Essa a.s and the second one being descending of Essas a.s. Molvi Muhammad Bashir had destroyed his both walls and now Mirza Was to prove how he became Masih e Moud which eventually made him run for life.
(Screen shots of relevant pages Seeratul Mahdi and RQ attached) 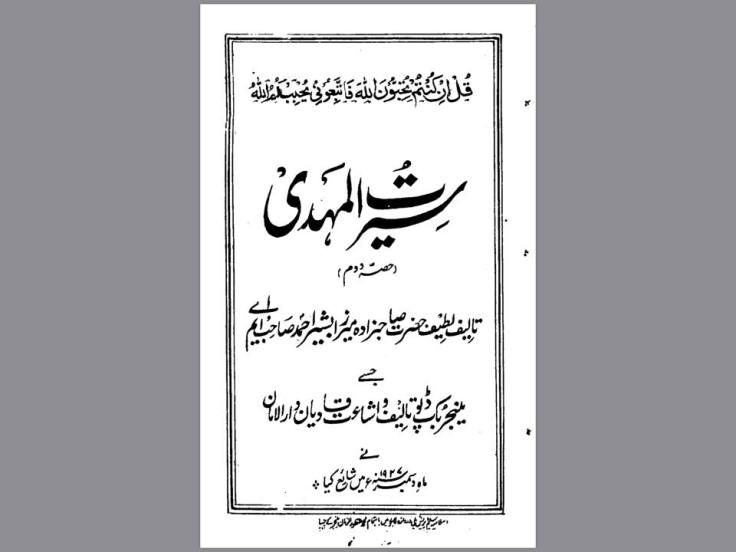 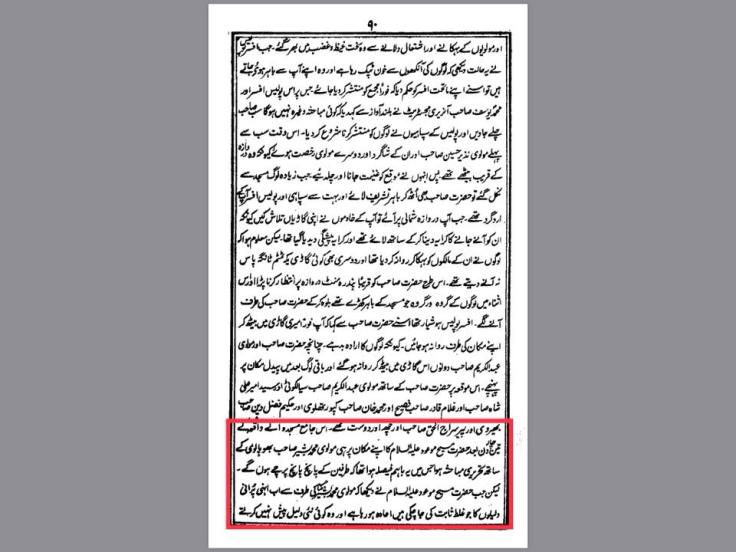 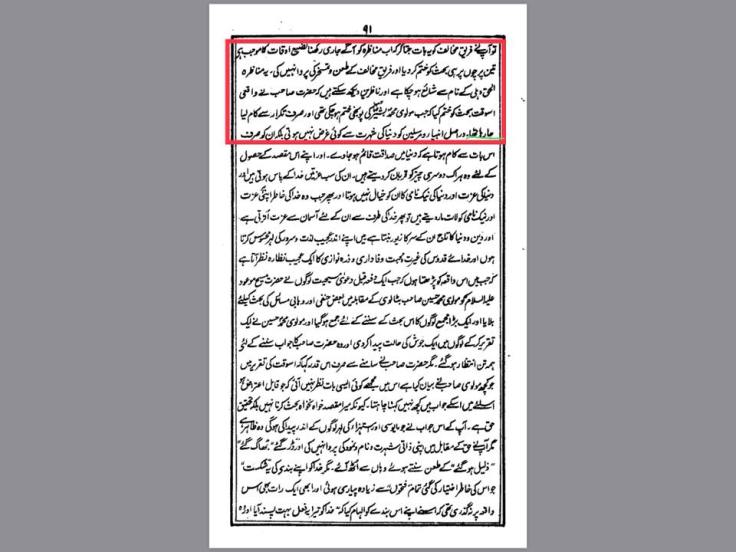 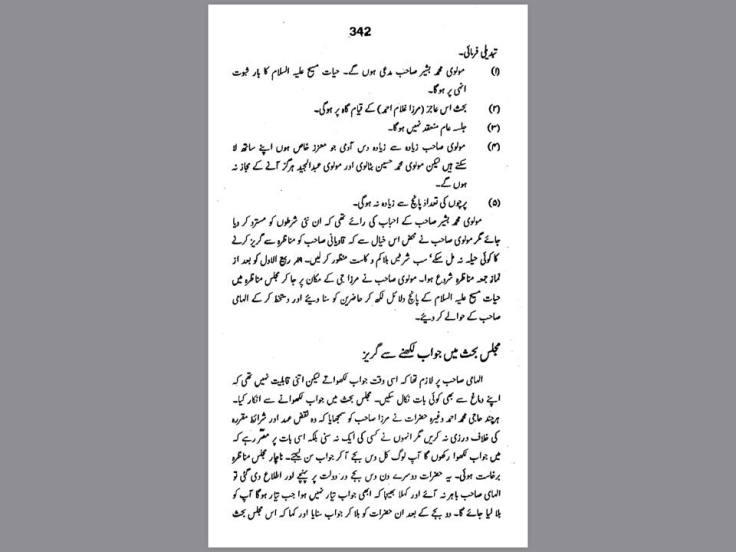 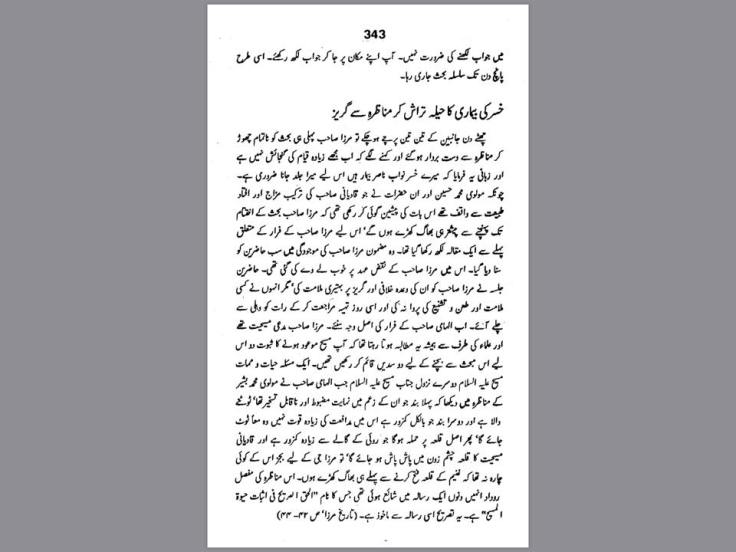