Intro
Before his Khilafat, in 1909, Mirza Basheer ud Din Mahmud Ahmad visited Jammu and Kashmir (see the ROR of October 1909), he went to the tomb of Yuz Asaf, he traveled with Mirza Bashir Ahmad, Maulvi Sarwar Shah and Mir Muhammad Ishaq. On 25 June 1921: the Ahmadiyya set out for his tour of Kashmir, which lasted a few months (see al-hakam archives). he had spent 2-3 months, until mid-september, he stayed in Srinagar for a while also, but mostly in Nasnoor. Per the order of the Khalifa, the village name changed from Nasnoor to Asnoor. The Khalifa also celebrated Eid Al-Adha there and led lots of Friday Sermons. The Khalifa also ordered the Ahmadi’s to change their style of dress from a Kashmiri style to a Punjabi style. There were also Ahmadi’s in a nearby village called Koreal, their names were Muhammad Ibrahim Ju, Hasan Ju, and Ghulam Muhammad Ju. Abdul Hayee Sayyed, the interviewer, is also from this village, as well as his father and grandfather. They all seem to be connected, all these “Ju” brothers (5 of them) seem to have become Ahmadi missionaries. Khwaja Ghulam Abdul Ghaffar remembers meeting the Khalifa in 1921, he was only 5 years old and he was ordered to put money in the Khalifa’s hand. MGA’s wife was also there in 1921, as well as Mirza Nasir Ahmad. The Khalifa and his mother visited many small-city/villages, like Abshar, Aharabal, Kausar Nag. There is a famous story, that the Khalifa’s mother also traveled to Kausar Nag with the Khalifa. Khwaja Ghulam Abdul Ghaffar’s father (Khwaja Abdul Qadir Dar) carried MGA’s wife up to Kausar Nag on his shoulders. By 2019, there seem to 4 additional villages in the south area of Kashmir that have a significant Ahmadi population (roughly 10,000 per Ahmadiyya sources), Reashinagar village, also spelled Reshnagri, see the google map page herein, Abdur Rahman Itu is the President of this Ahmadiyya village, which is reported as the largest Ahmadiyya village in Kashmir. Another village is Shurat village in Kulgam. Kulgam is a huge city center, Ahmadi’s seem to be located only in the village of Shurat, however, they may have spread around.There lots of young Ahmadi’s who are serving in the police and are teachers for the government of India, much to the consternation of the local Muslim community. There are 5 Ahmadiyya run schools in South Kashmir, mostly in these small villages. Basharat Ahmed Dar, village head of Asnoor is the official Ahmadiyya representative for his village, he seems to be a descendant of Khwaja Abdul Ghaffar Dar. The last two Ahmadi-only villages are Kani pora and Yari pora, both of these villages fall into to the Kulgam district, not much is known of these small and obscure villages. There is also an Ahmadiyya place of worship just north of Rajouri, its called Mosque Dehri Ralyote. This seems to be a new mosque, built in the past 40 years, we are unsure who had it built. There is also an ahmadi place of worship called Masjid Fazl in Poonch, Kashmir, India. We are unsure how many Ahmadi’s are there in the old town area of Poonch. There is also one Ahmadiyya mosque in Srinagar, Kashmir. There is a companion of MGA who was from Uri, Kashmir, Sayyid Nasir Shah, Sub-Overseer, Uri, Kashmir, he was the #240th person to accept Ahmadiyya (See Dard), per Ahmadiyya sources, his lineage is unknown, he became an Ahmadi as early as 1891, since he was present at the first ever Jalsa Salana, see #25.
_____________________________________________________________________________________________
1909

The ROR of Oct-1921 mentions how the Khalifa has returned to Qadian from Kashmir. 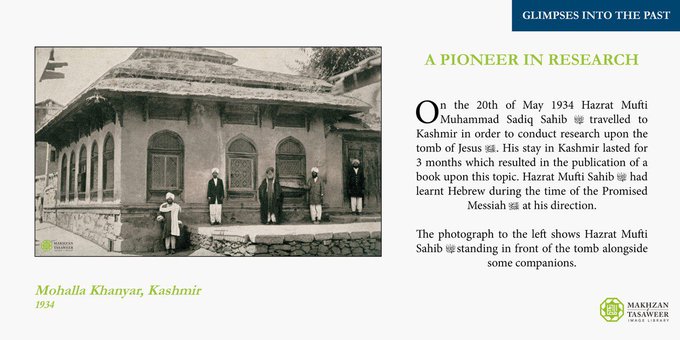 38 people are talking about this