In Canada, the Ahmadiyya movement is forced to publish a balance sheet, not in the USA or Germany or Africa

The problem here is the lack of transparency. You could point a few incidents where surplus revenue was utilized for other purposes. But that’s not the real problem here. What jama’at needs is consistent transparency. All Ahmadiyya financial numbers should be easily accessible to any Chanda paying members online. This is not a very big thing to ask for. They give Jama’at the money, Jama’at should tell them where every penny is spent.

So there’s actually a moral responsibility for Jama’at to issue a notice to its members explaining where the Jalsa Chanda money for 2020 would be spent.

Lack of transparency doesn’t always mean fraud. But if there’s no fraud or money mismanagement, there’s nothing that’s stopping the Jama’at from being transparent about their finances. If they say that publishing online isn’t safe, they can put a few hard copies in every masjid for members to review. There is no excuse for not being transparent.

Here, from my understanding, the only assets the Jamaat owns that have any real religious purpose are Mosques, and potentially undeveloped land (I have no idea what properties held in trust means so i’m going to leave that alone.) The Jamaat spent almost 15 million dollars on residences and mission houses. What residences are used for, I have no idea, I don’t see any reason why the Jamaat would need to spend money making houses for people. Second, I understand that mission houses are probably used for tabligh, but certainly 11 million dollars can be used differently for tabligh rather than building more houses? And why is it necessary for chanda money to go towards tabligh? Shouldn’t God’s true and destined religion be spreading around the four corners of the earth without the need of funding, especially with modern media? If an idea cannot spread without spending millions of dollars annually, then is it even a viable idea worth spreading, especially with modern media? If Ahmadiyya doesn’t need money to spread, and if it is true then it won’t, then the 15 million dollars that are squeezed out of Canadian Ahmadis are going down the drain.

Black lives Matter is without a doubt a movement that has great support especially in the west in just the past decade. As you may see, their donations in 2017 were only in the hundreds of thousands of dollars. As I remember, Black Lives Matter definitely had more following in 2017 than Ahmadiyya does in Canada in 2019. From this, we can conclude that movements, especially righteous ones, do not need funding in order to spread. If the idea is important enough, it will get around. However, despite this fact, the Jamaat deems it necessary to spend millions of dollars a year in order to spread Ahmadiyya. If Ahmadiyya is true, it should be getting way more traction than BLM, especially with the funding differences. However, the opposite is true. Therefore, it is factual that Canadian Chanda money is being wasted on mission houses and residences. Source: (https://apps.irs.gov/pub/epostcard/cor/474143254_201712_990_2019022316123190.pdf 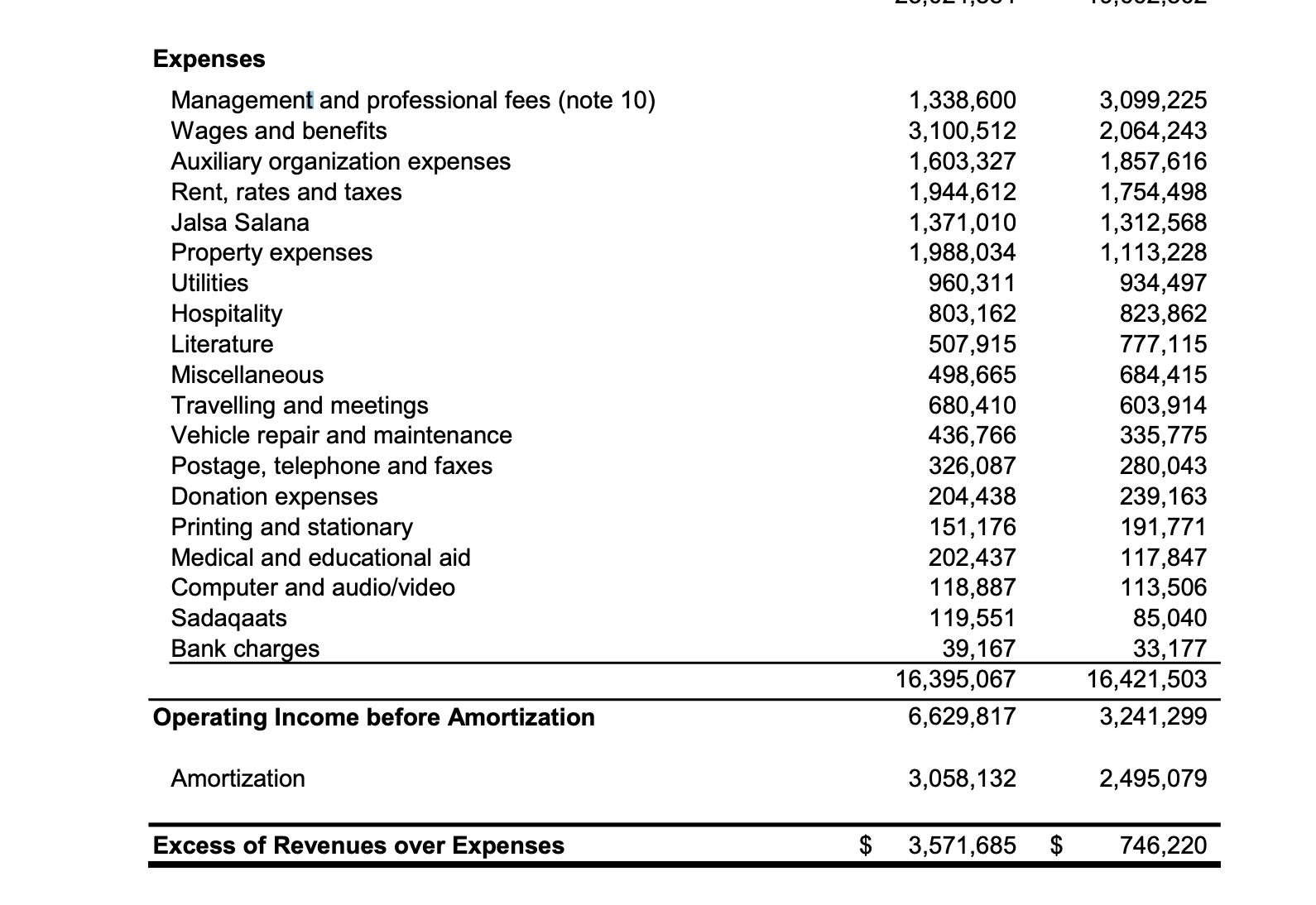 Here, we can see that the Canadian Jamaat spent more on faxing, mail, vehicle repair, wages, etc than it did on donating money (presumably to charities.) This negates the notion that Chanda money is a form of charity. Your Chanda money goes more towards paying for faxes and fixing cars than it does helping other people. It’s not even in the top 50% of what they spend their money on. How ridiculous is this.

So for those of you who wonder where 10% of your annual income goes to every year, here you go. It mostly goes towards fixing cars, sending faxes, paying for other people’s houses, and into other people’s pockets. And probably not even 1% of your money goes towards anything remotely helpful for humanity, or even for religion. Knowing this now, I am never giving another cent to the Jamaat. Hell, they honestly owe me my money back.

There is much more to this financial statement, but for the sake of sparing you all from my ignorant opinions, i’m gonna let you look at it for yourself, and hopefully those of you who understand these things can point out more absurdities within it.

“In addition, His Holiness said that Lajna funds that had been saved this year due to the fact that the National Ijtema of Lajna Imaillah UK was not held should be diverted to a humanitarian project – namely a maternity hospital being built by Lajna Imaillah UK in Sierra Leone.”

On behalf of Khuddam and Atfal in the US, MKA USA will be giving $100,000 to the Zion Mosque Project.

How to Spot Financial Fraud in a Non-Profit: The Warning Signs

6 thoughts on “In Canada, the Ahmadiyya movement is forced to publish a balance sheet, not in the USA or Germany or Africa”