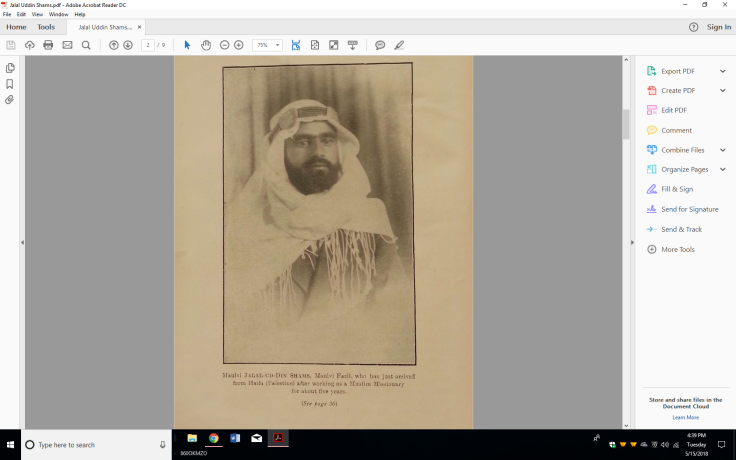 His father’s name was Khwaja Imam-ud-Din Wyne Sekhwani, and his grandfather’s name was Khwaja Muhammad Siddique. His father is listed in the 313 companions of the Promised Messiah (AS) as is his grandfather. They were ethnically Kashmiri and that’s why the have the foretitle Khwaja and the surtitle Wyne (“n” is silent) around their names, but they lived in Punjab, India.

His father, Imam-ud-Din, had two brothers: Jamal-ud-Din and Khair-ud-Din (also listed in the list of 313 companions) and they were known to be exceptionally poor. However, they strived so much financially that even though their combined amounts were still pretty meagre, the Promised Messiah (AS) gave them special attention. For example, for the construction of the white Minaret-ul-Masih (the minaret of the Messiah), which symbolised the mission of the Promised Messiah (AS) and the minaret mentioned in the hadith prophecies, there was a special call for construction funds. A minimum contribution of 100 rupees entitled the person’s name to be commemorated near the foundation. The three Sekhwani brothers, as they were called, asked for a special exception if they all three could combine their contribution to add up to 100 rupees. This was still a great financial sacrifice for their families and the Promised Messiah (AS) accepted their request and included their names along the list of those who made the 100 rupee contributions.

Imam-ud-Din made more than financial sacrifices in the cause of #Ahmadiyya. His son, JD Shams was a life dedicate to Ahmadiyyat. This meant that he had to leave for missionary assignments as ordered by the Khalifa. I heard from JD Shams’ sister’s daughter, Aamina who is still alive in the US, that Imam-ud-Din had a dream indicating his own death while his son, JD Shams was away (I think in Palestine or England). Aamina was a young girl living there at the time and personally witnessed this. Imam-ud-Din had written a letter to the Second Khalifa to allow his son to come home so that he could see him before he passed away, but as he started on his way he had second thoughts. He felt ashamed to ask for this when the time called for the sacrifice of persons and wealth for the cause of Islam. He went to the courtyard of his home and tore up the letter. He had the dream again, and wrote another letter, but tore up that letter too. He died before seeing his son again. He took comfort in the company of JD’s young son (i.e., his grandson), Dr. Salah-ud-Din Shams, who resembled his father JD.

One is Munir ud Din Shams, he is currently working as a Qadiani-Ahmadi missionary in the UK and is a major editor of MGA’s books into english. He is also Additional Wakilut-Tasnif.

He was attending the Ahmadiyya school at Qadian. Sheikh Abdur Rahman Misri was the Principal at the Talim ul Islam High School.

A civil war erupts in Syria and the French government had asked Maulvi Jalal ud Din Shams to leave, however, he refused, they then forced him to leave on 3-9-1928, they demanded that he leave in 24 hours, which he did. Maulvi Jalal ud Din Shams was ordered by his Khalifa to move to Haifa, he arrived 8 days later on 3-17-1928. He ends up travelling directly to a small town area called Kababir. It seems that the British government purposely worked on getting the Muslims of Kababir to convert to Ahmadiyya en-masse. It was the Odeh family, many of them have left Ahmadiyya by 2019.

In February of 1956 he became ill with plurasea and diabetes and for two and a quarter months remained in the Mayo Hospital, Lahore, then went to spend the summer in Quetta, he was giving accomodations by Sheikh Karim Bakhsh Sahib.

Maulana Shams served as Nazir Islaho-Irshad (in charge of missionary work in Pakistan) until his death on 13th October 1966. He held various positions until that time including: Secretary
of Bahishti Maqbarah, Managing Director of Al-Shirkat-ul- Islamiyyah, Secretary Majlis Iftaa, and President of Majlis Kaar Pardaaz. At the time of his death, he was survived by his wife and
seven children. He had written approximately seventy books in Urdu, Arabic, and English.

1 January 1966: Due to a risk of famine & drought in #Pakistan from lack of rain, Hazrat Khalifatul Masih III (rh) urged Ahmadis to dedicate two prostrations of nawafil for 7 seven days and pray for rain. On Huzoor’s instruction, Hazrat Jalaluddin Shams led Salat-ul-Istisqa (1/2) pic.twitter.com/4WUjjhS18i

Ahmadiyya officially claimed that the State of Israel is “temporary”

The Ahmady-only Company of the British Army (1941), part of the Punjab Regiment

Hani Tahir has written a new document (available in english), as he exposes the internal workings of Ahmadiyya

Ahmadis in the Israeli Military??

Ahmadis in the Israeli Military??

Ahmadiyya missionaries are sent to Russia illegally in 1923-1924

Review of Religions, August of 1932, “Factors which contribute to the success of a new religion and their application to the Ahmadiyya Movement”

Who is Sheikh Abdur Rehman Misri?

Who is Hafiz Raushan Ali?