Mirza Ghulam Ahmad’s strange predictions about sons for his followers

Intro
MGA made many strange predictions about sons for his followers, in this case, he promised a son to some eager followers, but the prediction ailed miserably. In the below, we have posted a quote from 1923, via Seeratul Mahdi wherein MGA claims that if a person ate mulberries, they will have a son. The person relating the story is from Mian Ghulam Nabi Sethi (also spelled Seth Ghulam Nabi), and about his wife and she climbed up onto a difficult mulberry tree and picked the finest mulberries for MGA to eat, as a reward, MGA claims that he will have a son, which he did, however, the son died after 18 months. This also reminds us of the failed son prediction for Mian Pir Manzur Muhammad.

(445) Mian Ghulam Nabi Sethi sb has stated to me that in the beginning, due to ATHRA ( Miscarriage), my wife had to face abortion. Hence I came to Qadiyan for the treatment of my wife by Hakim Molvi Nooruddin first kadiani Khalifa, The treatment started and meantime i kept requesting Hazrat Masih Moud for prayer in this regard.

One day when I was waiting for Hakim Noorudin in his clinic, he came and gave me good news. He said congratulation Mian Ghulam Nabi you need no more medical treatment as Hazrat sb has given you the good news of a son.

Then hakim sb told me that today Hazrat sb went to his garden along with Hazrat ummul momineen. Some of women including my wife and your’s were also accompanying with them.
Once in garden, Hazrat sb asked for “Shehtoot” (Mulberries). Few women went to take Shehtoot, your wife also went to pick mulberries to present to hazrat sb. These women picked all the mulberries they found but your wife climbed up the tree and picked some of the finest pieces of mulberries with her own hands.

When hazrat sb saw both kinds of mulberries, He asked as to why some of them are cleanest and other ones are slightly dirty. Hazrat Bivi Sahiba (Nusrat Jehan) begum told him that the cleaner ones have been picked up by wife of Mian Ghulam Nabi and rest by other women. She climbed up the tree and picked up each single piece with her own hands. Listening to this Hazrat sahib became pleased and prayed may Allah swt bless her with a boy.
Mian Ghulam Nabi sb states that after this prayer Allah swt blessed me with a boy but that boy died after attaining the age of 1 1/2 year.

He then goes on to say that hazrat sb sent a condolence letter to him and he got another boy afterward who remained alive. 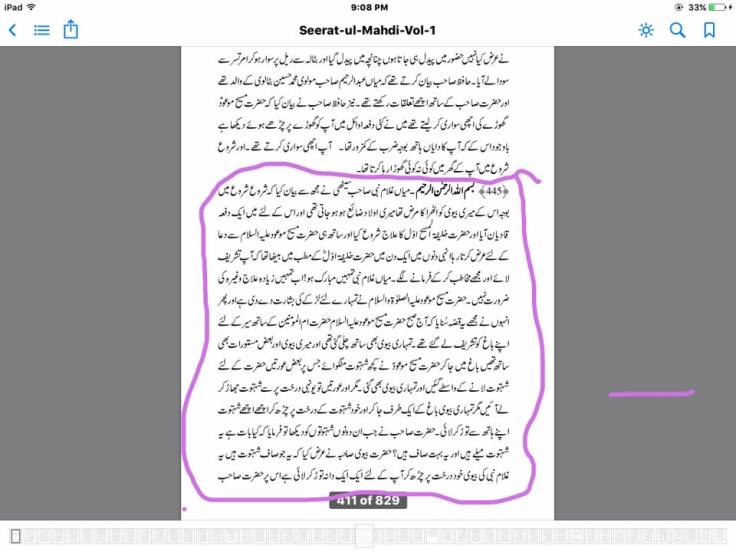 In this specific case, we have an issue of the Al-Fazl was 1939, wherein the Khalifa seems to have approved the marketing of a certain medicine of Noorudin:

“” those who wants to get male issue should order for this medicine which has been formulated by Aristotle of the time, the Royal physician, the master teacher Hakim Nooruddin. Its price is Rs 6.00 with discount u can get it for Rs 4.00. This medicine (Nemat Elahi) is given to man. It can be had from Dawa Khana Moeen us Sehat. Out siders should pay postal charges separately,  If u want a son instead of daughter try this medicine Nemat e elahi. This medicine is tested for 100 percent result. It is what ishtihar says which published in Al fazal of 13, December, 1939″””””

Ahmadiyya and pseudoscience and quackery

Tiryaq-e-Ilahi never worked on anyone…it was just a super-opium drug….

Ahmadiyya Promote Pseudoscientific ‘Treatment’ Homeopathy And Enjoy A Relationship With The Scientology Cult!

Nooruddin treated Mirza Ghulam Ahmad for impotency and many others, with opium!!!!

Mirza Basheer uddin Mahmud Ahmad was poisoned as a child, then had many mental issues

A newspaper, the Lancet calls MGA a scamp or a blasphemous idiot (1898)

Tiryaq-e-Ilahi never worked on anyone…it was just a super-opium drug….

Mirza Ghulam Ahmad liked his opium sprinkled into his Lassi

MGA lied about his Opium use

Ahmadiyya homeopathy is an obvious fraud

Was Mirza Ghulam Ahmad’s wife a concubine aka “LAUNDI” of Noorudin?

Mirza Ghulam loved to have multiple women on his bed

Mirza Ghulam Ahmad suffered from hysteria and convulsions, and his wife, and his son, Mirza Basheer-uddin Mahmud Ahmad–The 2nd Khalifa

What is “Zadham-e-Ishq” aka “the love potion”

Can a lunar eclipse be harmful to pregnant women?