Intro
In the history of Ahmadiyya, the Khalifa never seems to have visited the Azad Kashmir area officially. Raja Rahmatullah Khan (jagirdar) of Gouri, which is close to Muzzafarabad, Azad Kashmir, and is close to the border with Pakistan, seems to the earliest Ahmadi in modern day Azad Kashmir. Raja Rahmatullah Khan was given a jagir that was worth 100,000 rupees in those days, which is lots of money. He was also in full co-operation with the evil Dogra rulers. Raja Rahmatullah Khan was also an early Kashmiri-Ahmadi. Raja Rahmatullah Khan eventually quit Ahmadiyya (See at the 44:40 mark). Maulana Mahboob Alam seems to be the first missionary who was sent to Kotli, Azad Kashmir by the Ahmadiyya jamaat, most likely in 1904, he had joined Ahmadiyya in 1897, and was thus a companion of MGA, his age in this era is unknown. Ahmadiyya sources tell us that he was able to start lots of Ahmadiyya jamaats in Mirpur and Poonch, ahmadiyya sources claim that he was able to get people to convert to Ahmadiyya from villages like timenkot, Charnali village, Arabari village, there was a certain Ahmadi, Haji Ameer Alam who became the President of all the Ahmadiyya jamaat’s in Azad Kashmir for a long time, he was friends with Maulana Mahboob Alam, he was made an Ahmadi and he donated a masjid (location unknown). In roughly 1910–1913, Maulana Mahboob Alam had already spent at least 5-7 years in the Kotli area getting converts, it is thought that he was sent to Kotli around 1904 by MGA. Nevertheless, by 1910, he was asking to abruptly move to Gujrat and wrote a letter to the Khalifa (Noorudin) wherein he asked for permission, the Khalifa refused, in the meantime, he found a Muslim by the name of Chaudhry Allah Ditta, who seems to have begged Maulana Mahboob Alam to stay and to teach his children the Quran, per Ahmadiyya sources at least. Nevertheless, Chaudhry Allah Ditta had allowed this Maulana Mahboob Alam to stay in a house of his, however, he had sold the land and the Ahmadi imam that he would have to leave soon. Maulana Mahboob Alam flatly refused. Chaudhry Allah Ditta totally went missing after that, this appears to be a murder by the Ahmadi imam. Early on during the Khilafat of Mirza Basheer-ud-din Mahmud Ahmad (started in March of 1914), he asked to leave Azad Kashmir, but even this time the Khalifa refused. After this refusal, he never asked again and thus remained in the Kotli district for the rest of his life. In 1933, he was allowed to visit Qadian during the Jalsa (most likely December) and on his way back, he stopped at his home village in Gujrat. Remember, Maulana Mahboob Alam claimed to receive divine revelations, just like MGA’s “ummati-nabuwwat”, however, it was on a much smaller scale, there is a famous story of how he was revealed Quranic verses. Nevertheless, the story of his death contains one such Quranic verse. He died on January 4th, 1934, in Gujrat and was buried there.

The Ex-Ahmadi in this video claims that his ancestors and him were from Sodhan Gali, Azad Kashmir. It can be found here on google maps. He estimates that in the Kotli District, there are about 1,200 Ahmadi’s. In this video, this ex-ahmadi explains the origins of Ahmadiyya in Azad Kashmir, he claims that there is 1000 Ahmadi’s in and around Kotli. He also claims that there are Ahmadi’s in Goi, Azad Kashmir, about 300-400. Which seems to be a small village about 10-20 miles northeast of Kotli. It is up in the mountains and the border of India is just a few miles away. In 2020, the Ahmadi’s of Goi, Azad Kashmir seem to have blocked access to a Sunni Mosque, which had been illegally occupied by Ahmadi’s.

Ahmadi’s complained to the Azad Kashmir government about their attempts at building a mosque and etc. 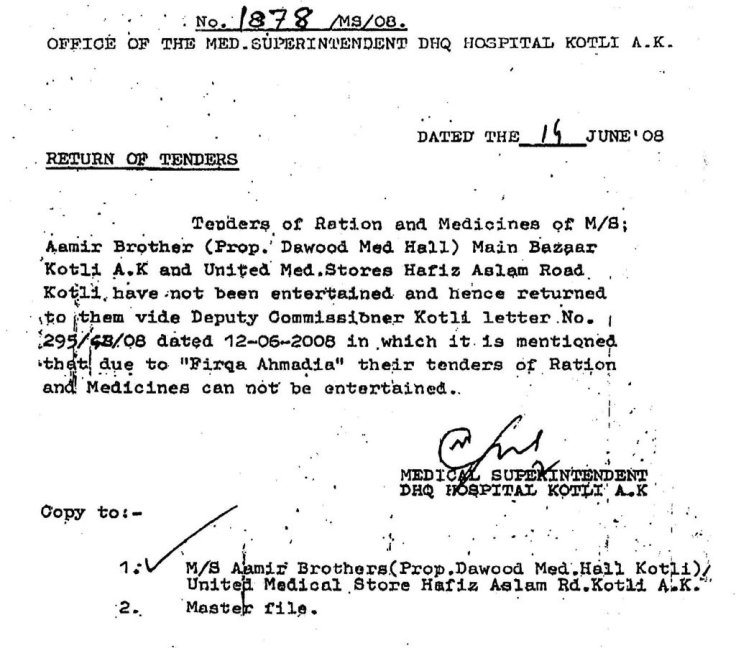 A video surfaced on twitter wherein it is written on a cemetary wall that #ahmadis are not allowed to enter.

Who is Ghulam Nabi Gilkar?

Who is Maulana Mahboob Alam?

Who was Haji Umar Dar?

Who is Raja Atta Muhammad Khan?