The history of Ahmadiyya in Mauritius

Intro
Ahmadiyya ideologies were promoted by the British government all over their vast empire.  Especially after WW-1 (1919) and WW-2 (1945). Sufi Ghulam Muhammad was sent as a missionary to Mauritius, however, he stops in Sri Lanka and worked on creating an Ahmadiyya center there. Per the english-ROR of February, a new Ahmadiyya missionary, Maulvi Hafiz Ghulam Muhammad, B.A. was also sent to Ceylon, aka Sri Lanka. February 1915, page 80.

On the 27th July 1928: Hafiz Jamal Ahmad was sent to Mauritius as a missionary. He spent the next 21 years serving there, propagating the message of Islam on this island. He passed away on 27 December 1949 and was buried there. On his demise, the 2nd Khalifa said about Mauritius, “Blessed is that land where one as supremely resolute and pious as him is buried”. Read about Ahmadiyya in Mayotte too, its a similar and nearby island.

“On 25 September [1920], I went to Phoenix with Maulvi Obaidullah Sahib and gave lectures. First Maulvi Obaidullah Sahib delivered a speech on How to recognise true religion. Then, I made a speech and proved that the Promised Messiahas drew the attention of the people [towards God’s message] and some of them considered him a liar but did not confront him out of fear and thought that he would die after some time and everything would remain in their hands. However, some people mulled over and accepted him after recognising the arguments of his truth. [I explained that] after Ahmadas, many people had learned the arguments of truth and started to carry out tabligh to others. They have not only reached [and conveyed his message] in India but also in Nigeria, Sierra Leone, England, America and Australia. By the grace of God, [my speech] had a positive influence on the audience. A non-Ahmadi promised that he would offer Jumuah prayers with Ahmadis in Rose Hill [mosque]. Subsequently, he fulfilled his promise and hopefully, he will announce his conversion to Ahmadiyyat in a few days, insha-Allah!

“By the grace of God, the proceedings of the mosque’s case have come to an end and the only thing remaining is the issuing of the verdict. Consequently, we have planned to hold public lectures at the cinema hall on the first weekend of every month. All praise be to Allah that we have started as planned. On the afternoon of 3 October 1920, the lecture began and there was a large audience as well. The subject of the speech was that Islam is the only religion which is alive. Its living proof is the Promised Messiahas and his true successors. The religion of Hindus is not alive because God does not communicate with the followers of the Vedas. Moreover, the religion of the believers of Gospels is no longer alive because no other Christian receives any revelation after the disciples of Jesusas, nor does the Holy Spirit descend upon them. I told the audience that the Islam of non-Ahmadis was also dead and the only living proof of the truth of Islam is the Promised Messiahas. By the grace of God, [my words] had a profound effect [on the participants].

“Hindu dignitaries were also present in the gathering and they included a barrister-at-law and an attorney-at-law. Maulvi Obaidullah Sahib writes that a lot of people gathered on the death of an Ahmadi brother’s son and tabligh was done among them. A sermon was also delivered on the women’s side.

“A conversation took place with a Christian at Phoenix Station. As he could not understand Urdu, it was the first time that a religious issue was discussed in Mauritian language in a public gathering.

In the May-1926 edition of the ROR, a photo of is given of Hafiz Ghulam Hussain.

The 3rd Ahmadiyya mullah is sent to Mauritius from Qadian, his name is Jamal Ahmad. They claim that he is a Hafiz, however, this a lie. Who verified his Hifz? See the January-1930 edition of ROR. 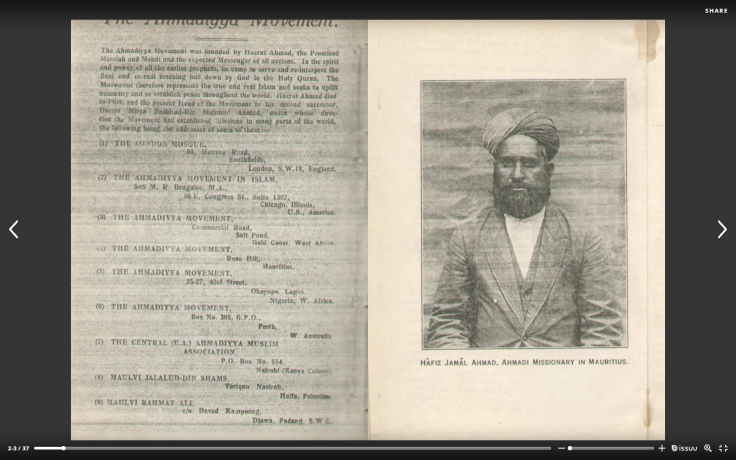 A brief history from the 1950s in the Mauritius Jammat summarized in the introduction of this booklet called “Victory of Khilafat”. 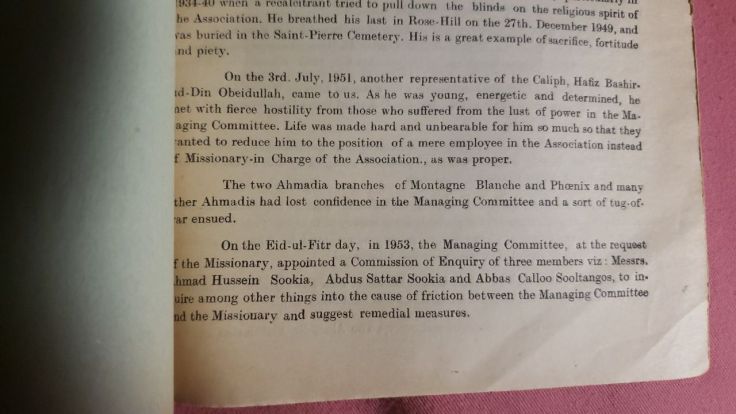 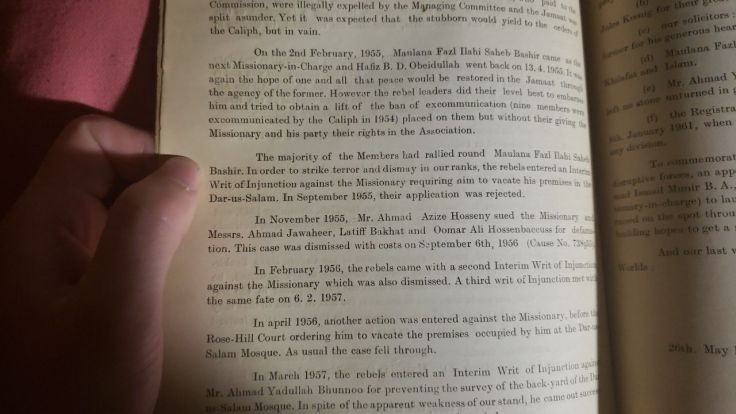 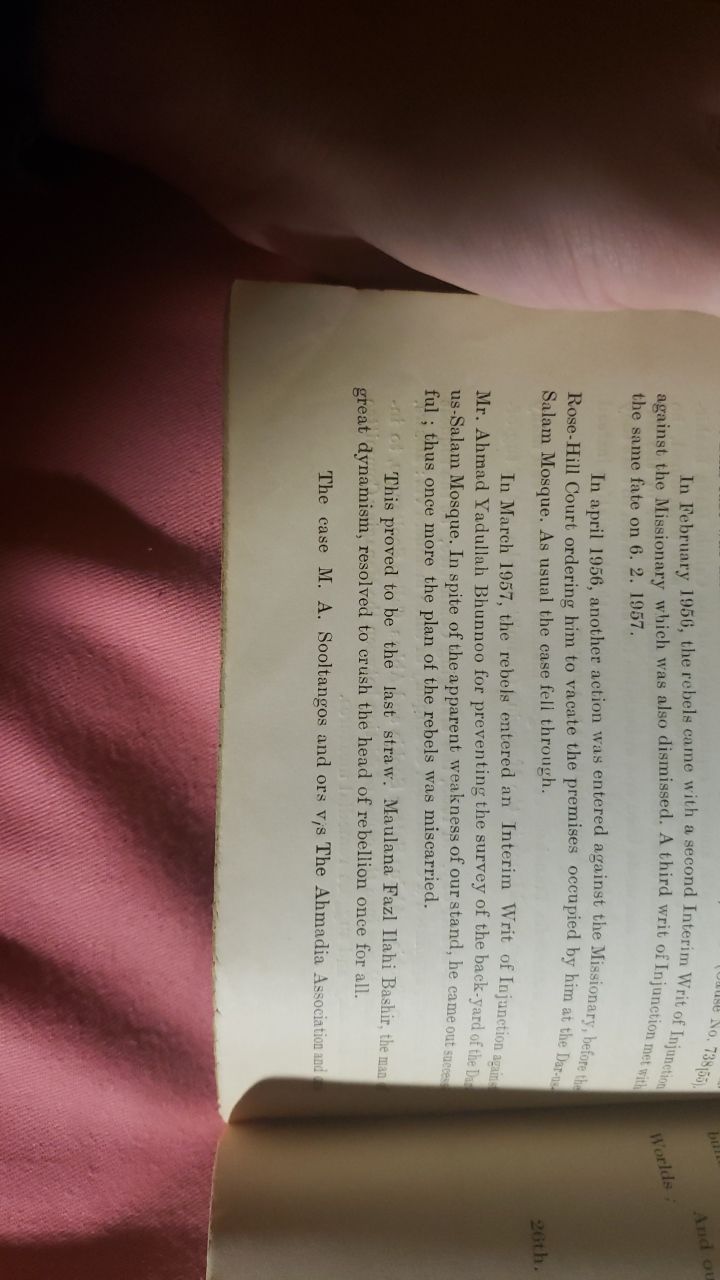 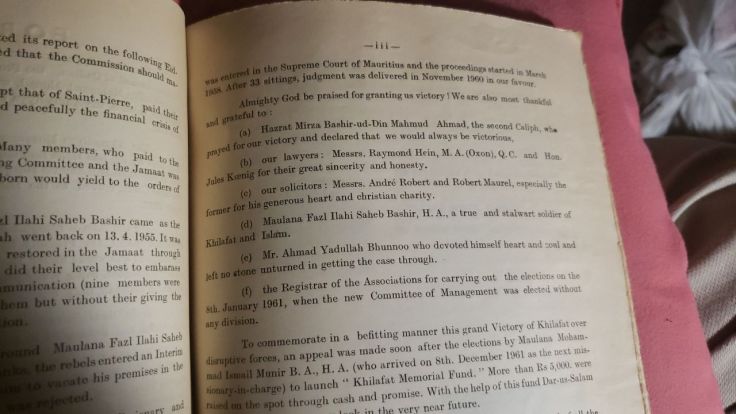 The history of Ahmadiyya in Sri Lanka aka Ceylon

4 thoughts on “The history of Ahmadiyya in Mauritius”