The history of Ahmadiyya in Sri Lanka aka Ceylon

There seem to be 2 Ahmadiyya places of worship in the entire country. 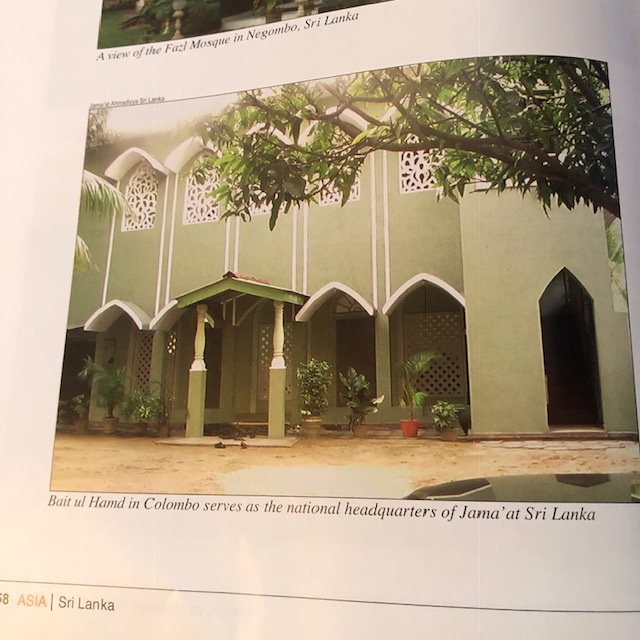 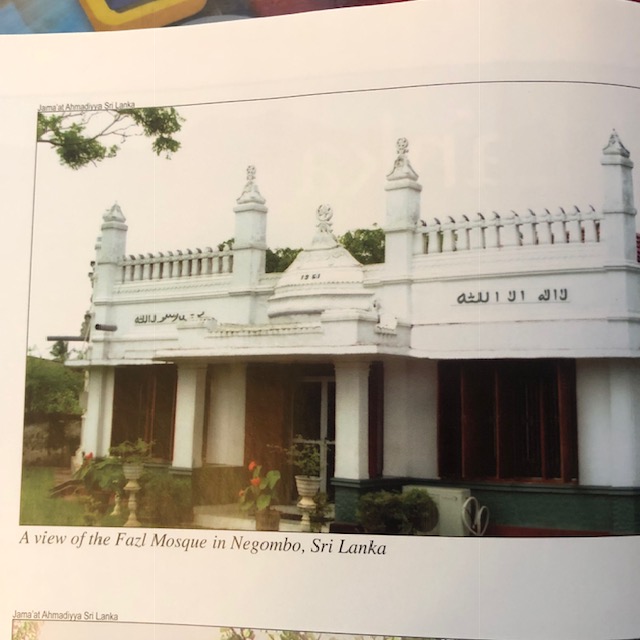 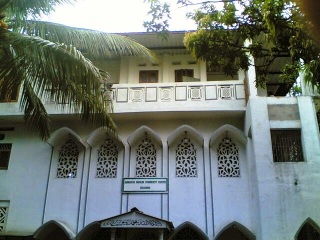 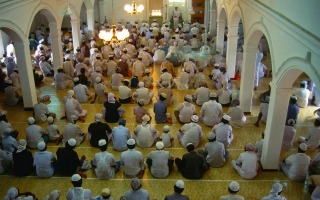 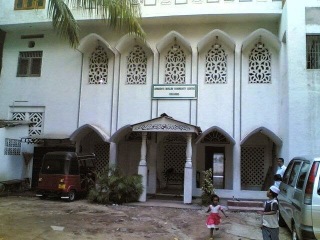 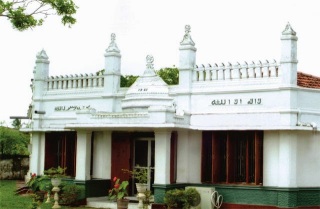 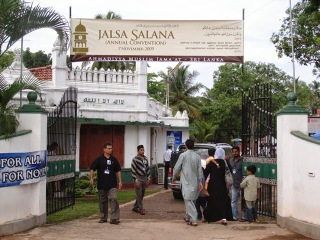 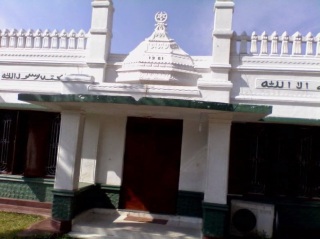 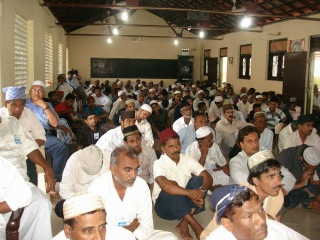 Sufi Ghulam Muhammad is sent as a missionary to Mauritius, however, he stops in Sri Lanka and works on creating an Ahmadiyya center there. Per the english-ROR of February, a new Ahmadiyya missionary, Maulvi Hafiz Ghulam Muhammad, B.A. was also sent to Ceylon, aka Sri Lanka. February 1915, page 80. He left Qadian on February 20th, 1915, he was educated at the famous Aligarh Muslim College, many Ahmadi mullahs were educated there. This was before the Jamia was created at Qadian. He was also set to travel to Mauritius.

The ROR of July-1916 has many reviews on the Part-1 of an english commentary of the Quran. It specifically has a review from the Madras Times. The Madras Times has an essay entitled, “A Mahdi in India” (June 8th, 1916). It is reportedly published by from Madras by a company called, Messrs. Addison and Co of Madras. The “Bulletin” of Lahore also gave a review. There is also a review from Colombo, Ceylon (modern say Sri Lanka). There is another note about a monthly meeting wherein Mr. T.K. Lye was the chair. A man named I.L.M. Adbul Aziz is discussed as well as his letter to MGA from 1908, he has connections with the Moorish society. The 1-year anniversary of Ahmadiyya in Sri Lanka was getting close. They also mentioned a newspaper “Islam Mittram”, it seems that the editor of this newspaper was punished by the British government. The famous revelation of MGA is quoted, “I will bring to disgrace to every one who intends to disgrace you”. Mr. Mhd B.W. Lye (joint secretary, Slave Island) reports that Muslims are opposing Ahmadi’s and some moorish people have been impressed with the letter of I.L.M. Abdul Aziz to MGA.

The ROR of Sep-1916 gives a letter by Brother Mr. Mohd. B.W. Lye. In this letter, Lye explains how they are translating a letter by Bro J.L.M. Abdul Aziz to MGA from 1908 into Tamil. Lye claims that this caused a sensation in Moorish circles. Ahmadi’s are anxious for a missionary.

The ROR of Dec-1916 reports that a Nigerian man named L. Muhammad Lawal asked for english literature from the Ahmadi’s in Sri Lanka and they sent it to him.

The ROR of Jan-1917 alleges that Ahmadi’s in Ceylon (Sri Lanka) are having the hardest time.

The ROR of April-May-1917 gives reviews of the Qadiani english commentary on the Quran (Part-1). It is alleged that the editor of “The Daily Gazette” from Sindh wrote a review. It is also alleged that a reverend from the USA wrote a review, as well as a person from Sri Lanka.

The ROR of June-1917 reports that the first edition of “The Message” has been published. It also reports that an Ahmadi from Sri Lanka who was in Qadian for training has died, his name was Jamal-ud-Din. M. Abul Hassan has been sent to serve in his spot.

The ROR of Aug-1917 reports strong opposition from the Muslims of Slave Island, Colombo, Sri Lanka (Ceylon). Muhammad B.W. Lye is the honorary Ahmadiyya secretary and gives his report. His father led the prayer and his newspaper “The Message” is active.

The Jan-1918 edition of the ROR reports that there are barely 15 Ahmadi’s on the entire island. A journal called “The Message” was also started, they claim to have circulation in the Punjab, Hyderabad, Malabar and Burma. Muhammad B.W. Lye is the Ahmadiyya secretary. Maulana A.P. Ibrahim is the Ahmadiyya mullah. There is another man named T.K. Lye.

The Feb-1918 edition of the ROR reports that 13 people converted to Ahmadiyya.

The Aug-Sep-1918 edition of the ROR reports that there are roughly 70 Ahmadi’s in Ceylon (aka Sri Lanka). They also report that Maulvi Muhammad Ali (the president of the Lahori-Ahmadi’s) sent his famous book, “Prophethood in Islam” to the Ahmadi’s therein.

The Jan-Feb-1919 edition of the ROR reports that Maulvi Hafiz Ghulam Muhammad, B.A. and clashing with the local Muslim community. The ROR of Aug-Sep-1919 reports that 6 young men have been sent to Qadian for training.

The The Review of Religions, October and November 1919 reports:

The secretary of the Colombo Ahmadiyya Association reports:

“Opposition to us has become very bitter again, owing to malicious letters appearing in a local non-Ahmadi paper and the continued preaching by a South Indian, thousands flocking to hear him. He has preached in four centers and now last of all is expected in Slave Island. We are not afraid. Allah is our Helper.”

Per Ahmadiyya sources, an ahmadi and his sons severely beat up some Muslims and were nevertheless acquitted. The British judges, who were appointed by the British government absolved these Ahmadi’s even though they were clearly guilty. The names of Ahmadi’s are not given. The ROR of July–1920 reports that Ahmadi’s were involved in murder, the names are given as Mr. B.W. Lye, who was the secretary of the Ahmadiyya Anjuman, and with a man named Sheriff and his own brother, Abdul Amit Lye. They killed a Muslim man named, Buckman Saffudeen.

A permanent Ahmadiyya missionary is sent to Sri Lanka, his name is Maulana A.P. Ibrahim.

In 1929, it seems that she showed up at Colombo, Sri Lanka and was brought to Qadian by Mufti Muhammad Sadiq via a special mission. Her name was changed to Hidayt Budd. She was most likely a prostitute that was bought and shared with the Khalifa at Qadian. Hafiz Qudratullah (1917-1994) was a missionary of the Ahmadiyya Movement and he explains how he saw her at Qadian in his youth. Hafiz Qudratullah (1917-1994 remembers seeing Hidayt Budd at Mufti Muhammad Sadiq’s house in Qadian (most likely in the 1920’s and 30’s).The english ROR posted her picture in the May-1929 edition of the ROR, she seems to have been single at the time. In the August-1929 edition of the ROR, it is explained how Hidayt Budd arrived in Colombo, Sri Lanka on May 10th, 1929. Ahmadiyya sources tell how she was apart of the Ceylon Ahmadiyya Association and gave speeches and etc. However, they don’t tell us how she got to Sri Lanka.  There seems to be a photo of her in the famous “Ahmadiyya Muslim Mosques Around the World”. In the September-1929 edition of the ROR, there is a letter of welcome from the local Lajna of Qadian. They appreciate her as the first Dutch person to join Ahmadiyya. In fact, it was Mufti Muhammad Sadiq who was sent by the Khalifa to pick her up from Colombo, Sri Lanka (see her letter published in the ROR of September-1929), they must have had some type of connection, he married her soon thereafter. She also reports that some of the Indonesian students at the Ahmadiyya Madrassa had written in Dutch on the wall so as to get her attention (men in indonesia spoke Dutch in those days). 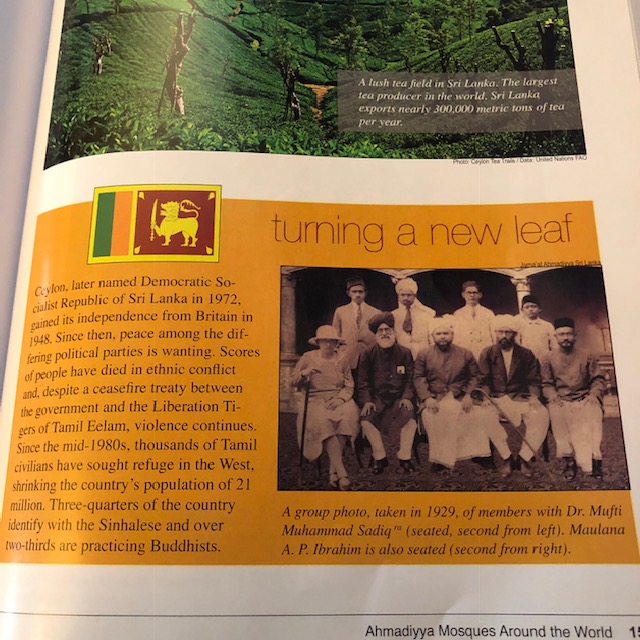 For the first time ever, an Ahmadiyya Khalifa visits.

Pics from “Ahmadiyya mosques around the world, a pictorial presentation 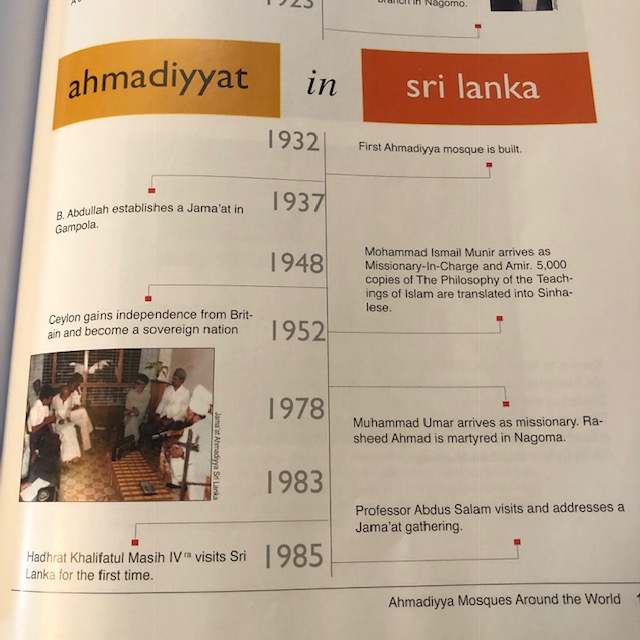 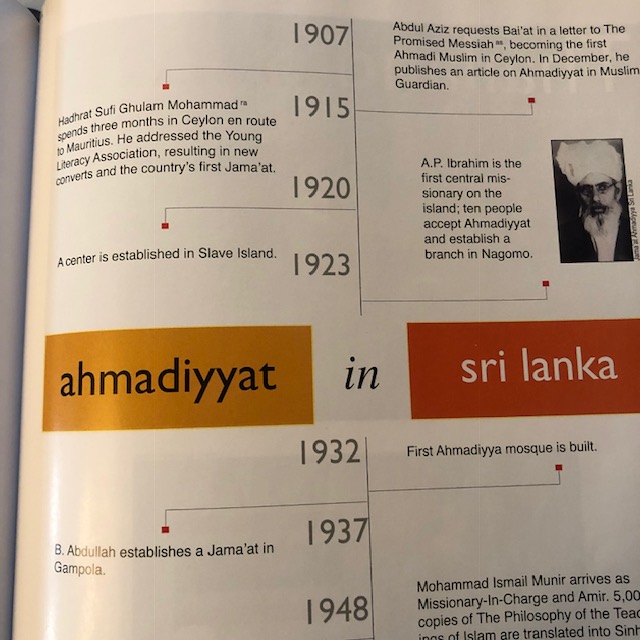 100 Years Ago… – “I shall humiliate him who seeks to humiliate you”: Ahmadiyya victory in Ceylon

The history of the Lahori and Qadiani Ahmadi’s by Dr. Gerdien Jonker, Ph.D–Research Scholar Germany

100 years of the Ahmadiyya Muslim Community in Mauritius