How many Ahmadis are there in India in 2021?

Intro
Based on thorough research, we estimate that there are roughly 10,000 Ahmadi’s in all of India by 2021. About 800 in Kashmir and another 3,681 (see Nicholas Evans work) in Qadian and roughly another 6600 in the rest of India. Nicholas Evans conducted anthropological field work at Qadian in 2011 and was told about the convert numbers of 2008-2010. This was given to him by the main admin offices at Qadian. Remember, back in 2001, Mirza Tahir Ahmad was announcing 40 million new Ahmadi’s from India alone. We knew Ahmadiyya mullahs totally lied and now we have additional proof of it. Finally, we seriously doubt there were even 1726 Indian’s converted to Ahmadiyya in this 3 year period, we estimate it was barely 200-300, and even those people were poor and in need.

Griswold tells us that the 1911 census shows 18,695 Ahmadi’s in the Punjab only, he doesn’t give the number for UP or Bombay residency. This is totally in-line with the British government official records. The English-ROR of April 1911 discusses the census of 1911 and Ahmadi’s complain of not getting properly noted as Ahmadi’s in the census.

Moulana Ahmad Kabir Noor is dead. He leaves behind many small children, he is in his 40’s. From 25th November 1912, Moulana Syed Abdul Wahed started taking Bai’ats in Brahmanbaria. Maulvi Noorudin had approved him to take bait’s (See ROR of May-1936 also).

The ROR of January-1916 tells the world that the Ahmadiyya Movement is nothing without the support of the British Government, this was in an article entitled, “God Bless the British Government”. This is no secret, its a fact, even though Ahmadis refuse to admit to it. This article mentions the death penalty which was meted out to Syed Abdul Latif and his disciple (Abdur Rahman)(12-13 years ago)(read my essay on the history of Ahmadiyya in Afghanistan). This was during WW-1, Ahmadi’s were so loyal to the British that the British allowed them to open in Mauritius, Sri Lanka and London. In fact, they even called the King of England as their temporal Khalifa. The Ahmadiyya Movement has continued with this trend, in 1984, the 4th Khalifa moved to London and lived under asylum until his death.

The ROR of January-1916 tells the world that the Ahmadiyya Movement is nothing without the support of the British Government, this was in an article entitled, “God Bless the British Government”. This is no secret, its a fact, even though Ahmadis refuse to admit to it. This article mentions the death penalty which was meted out to Syed Abdul Latif and his disciple (Abdur Rahman)(12-13 years ago)(read my essay on the history of Ahmadiyya in Afghanistan). This was during WW-1, Ahmadi’s were so loyal to the British that the British allowed them to open in Mauritius, Sri Lanka and London. In fact, they even called the King of England as their temporal Khalifa. The Ahmadiyya Movement has continued with this trend, in 1984, the 4th Khalifa moved to London and lived under asylum until his death.

The ROR of January-1916 also tells the world that back in 1912, Ahmadi’s were persecuted so severely that some had to ruin for their lives, this was in the Malabar region of India, this was specifically about Cannanore. British authorities came to their rescue.

They continue to write how the British Government was a god-send, and without them the Mirza family business would be over. It continues to report that a Miss Annie Besant, editor of the “New India” wrote against the Ahmadiyya Movement. She seems to have called it teenagers fighting each other. Another local newspaper, “The West Coast Reformer” writes on Dec-22-1915. This newspaper tells us about a high-officer in the British military who want’s Ahmadiyya writings spread into the N.W.F.P., this proves that the British Government wanted Ahmadiyya propaganda to be published everywhere.

It also alleges that there are 2000 Ahmadi’s in Cannanore. It seems that Ahmadi’s were expelled from a mosque that they tried to take over by Sultan Ali Raja (aka Ali Raja or Adi Raja was the title of the Muslim king of Arakkal kingdom from the sixteenth to early nineteenth century). Mr. Innes immediately issued an order that Ahmadi’s should get free land for a temple and graveyard. 2 additional newspapers, “The Onlooker” and “Cochin Argus”, dated Dec-16-1915 also tells the same, they go further and tells the world that Sultan Ali Raja land was confiscated and given to Ahmadi’s. The British authorities pressed Sultan Ali Raja to post an announcement in all of the mosques under his control wherein it would be said to stop persecuting Ahmadi’s. However, the Sultan Ali Raja refused and told the British authorities that he was unaware of any persecution vs. Ahmadi’s. British authorities then threatened Sultan Ali Raja to stop the persecution of Ahmadi’s, if not, he would use “The Defense of India Act” and get his imam’s deported.  “New India” newspaper is quoted again, as well as the “The West Coast Spectator” dated Nov-11-1915, it mentions how a police officer, Mr. Windle is helping Ahmadi’s and making sure they are not molested. These newspapers seem to argue over this entire situation.

The ROR of February-1916 reports that the British Government gave the Ahmadiyya Movement a free graveyard and a huge plot of land to build a temple, for free. This was a trend in these days.

The ROR of March-April-1916 alleges that there were lots of opposition by Muslims, however, the Cannanore Ahmadiyya temple is about to get built in the Malabar region. It also reports that in North India Ahmadi’s are also working, giving lectures and etc. Sh. Abdur Rehman was one of the speakers. Other speakers were Moulvi Abul Hasham Khan Choudry, Zafrullah Khan and Maulvi Muhammad Din.

The ROR of June-1916 also alleges that three Qadiani-Ahmadi missionaries were sent to Chittagong, Bengal, British-India (modern day Chattogram, Bangladesh). It was Fateh Muhammad Sayyal, Moulvi Sayed Sarwaar Shah and Maulvie Sheikh Abdur Rahman (graduate of Al-Azhar, and a Maulvie Fazil). The ROR alleges that their place of residence was set on fire and these murrabi’s barely escaped. The ROR of June-1916 alleges that Mufti Muhammad Sadiq was in Adyar, Madras, British-India and was able to convert someone to Ahmadiyya.

The ROR of July-1916 reports that Mufti Muhammad Sadiq visited Madras, and also visited the alleged Tomb of Saint Thomas. He then argued that this was in-fact a 1900 year old tomb, just like the Yuz Asaf tomb. Again, in 1916, via the ROR of Nov, an Ahmadi missionary, Hafiz Maulvi Ghulam Muhammad (B.A.) claimed that it wasn’t just Jesus who travelled to India, nay, he claimed that even St. Thomas had travelled to India and died. However, he didn’t tell the world that this was a lie from the Portuguese Empire. The Portuguese were the first Europeans in India and landed in coastal towns and setup their businesses.

The ROR of Aug-1917 reports that in Patna, Bihar State, British-India, Ahmadi’s were declared as Muslim. Courts in Amritsar and Bahawalpur have followed this judgement and have announced the same. Ahmadi’s in Malabar are facing the same type of issues. In terms of Bengal, Pir Sirajul Haq Nuamani is mentioned as someone who is going to be chairing a conference of Ahmadi’s in Bengal (modern day Bangladesh). Mirza Bashir Ahmad is in Bombay and looking to find people to convert to Ahmadiyya. Mr. F.M. Sayal (M.A.) has been sent to Kashmir. Maulvi Arjumand Khan (A graduate of the Ahmadiyya Theology College and a Maulvi Fazil [H.A]) is working in the North Western Frontier Provinces (N.W.F.P.). Maulvi Khalil Ahmad is working out of Monghyr, Bihar State. Another man, Muhammad Ji (H.A.), and a professor at the Ahmadiyya Theology College is working out of Hazara. There are also many additional honorary Maulvies working in many parts of British-India.

The Jan-1918 edition of the ROR reports that Ahmadi’s in East India are facing persecution, specifically in Cuttock (State of Orissa). It also states that the Ahmadi’s of Malabar were facing similar issues and the British Government helped.

The Feb-1918 edition of the ROR reports that Khalil Ahmad, Fazl Shah, Sardar Khan, Muhammad Parel and Muhammad Usman are working out of Bombay, Mysore, Sholapur Sindh and Baroda State.

The ROR of Mar-Apr-1918 published an article entitled, “Persecution of Ahmadi’s” wherein it discussed how life is hard for Ahmadi’s in Afghanistan, it also quotes the famous “Ahl-i-Hadis” newspaper wherein they write about how life is easy for Ahmadi’s in Cuttack (Orissa)(which is South-East-India, close to Bangladesh). They also discussed funeral prayers for Ahmadi’s and non-Ahmadi’s.

The Aug-Sep-1918 edition of the ROR reports that an Ahmadi is now working in Port Blair, Adaman Islands, his name is Mr. Abdur Rahman, he is a former teacher at the T.I. school in Qadian. Ahmadiyya sources claim that he converted 10 people to Ahmadiyya. The Adaman islands were a colony of the British Government at this time.

In the Oct-Nov-1919 edition, Abul Hashem Khan Choudri is listed as an Assistant Inspector of Schools in Dacca Division, Bengal. They claim that he is working on a refutation of Muhammad Ali’s famous book of 1918, “The Split“. However, this refutation was never published or ever heard of again. In Dec-1919, he wrote a book review on H.A.  Walter’s famous book on Ahmadiyya.

The ROR of May-1936 has an essay by Maulvi Mubarak Ali, entitled, “The Ahmadiyya Movement in Bengal”.

We have counted roughly 20 Ahmadiyya missions via Google maps. Read our work herein. Also read about Seth Abdullah Allahdin and his Ahmadiyya work around Secunderabad, Hyderabad.

A Qadiani-Ahmadi is made a judge

Dr Kauser Edappagath served as the Principal District and Sessions Judge in #Ernakulam​ before his recent appointment to the High Court in Kerala.

The Indian government refused to give Ahmadi’s citizenship visas since Ahmadi’s fought against India many times.

In a meeting with the national Khuddam Amla of India on 10th April 2021, Mirza Masroor Ahmed provided a hint for the actual population in India by asking the Atfal tajnid:

Addressing mohtamim Atfal, Hazrat Khalifatul Masih aa asked how many Atfal there were and what plans were made for their tarbiyat. He replied that there were 3,343 Atfal and that they had prepared various classes to help ensure their progress and tarbiyat.

This presents a tangible, concrete figure to work with. We now know that Ahmadi males in India between ages of 7-15 are 3,343 exactly. We can now use census data to estimate the remainder of the population in India, assuming that the Ahmadi population in India does not differ significantly in relevant demographics from the rest of India. Using age and sex data from the 2011 Indian census, we found out that males aged 6-15 are 11.2% of the Indian population.

An additional tidbit from the same meeting is that the combined total Khuddam and Atfal waqifeen-e-nau in India are 2,484. This sounds a reasonable 10% of the 29,814 Ahmadiyya population in India. 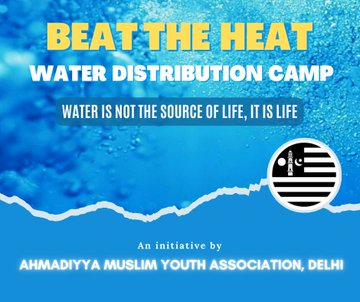 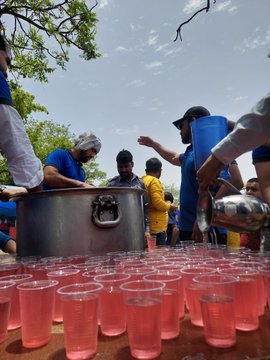 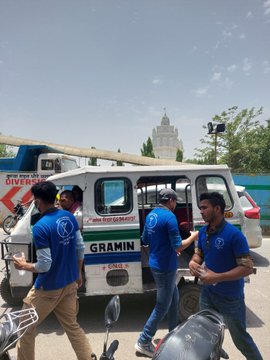 The history of Ahmadiyya in Bangladesh

Who is Seth Abdullah Allahdin?

Who is Fateh Muhammad Sial?