Intro
Mirza Imam Din seems to have been just 5 years older than MGA, we estimate 5 years, that is based on the court case of 1865, the pension story and the fact that his daughter (his only surviving child) was married to MGA’s son (Mirza Sultan Ahmad) in roughly 1883. In 1857, many men from the Mirza family from Qadian helped the British led by Mirza Ghulam Murtaza, the uncle of Mirza Imam ud Din and brother of Muhyuddin, even Mirza Ghulam Kadir participated heavily. However, only Mirza Ghulam Murtaza was given pension. This caused considerable turmoil in the family, since MGA’s father (Murtaza) was depriving his nephews of an earned pension. Thus from 1858 to 1865, only Mirza Ghulam Murtaza was given pension.
He had 4 siblings in total as recorded in Dard, (see page 74), his brothers were Mirza Nizam Din and Kamal Din, and his sisters had the same name, Hurmat Bibi and Umar-un-Nissa. Hurmat Bibi was married to Mirza Ghulam Qadir (MGA’s brother) these were the children of Mirza Ghulam Muhyuddin, who was the brother of MGA’s father, so these were MGA’s first cousins.  Mirza Ghulam Muhyuddin (MGA’s paternal uncle) died in 1866, just a few months after the famous settlement of 1865, thus, this might have been a premeditated murder. Nevertheless, these were real close relations of MGA.  In fact, in Indian culture, and even Islamic culture, MGA and Mirza Imam Din were brothers, not cousins. In 1865, many men from the Mirza family seem to have sued MGA’s father and won. There was a huge settlement of 1865 which included lots of MGA’s cousins and uncles as beneficiaries of a new pension. Then we have the famous pension story wherein MGA squandered his father’s pension with Mirza Imam Ud Din in tow.  This must have been just after the settlement of 1865, thus this also proves that MGA was in Sialkot from 1865 to 1869. Dard tells us that Mirza Imam ud Din tried to kill Mirza Ghulam Murtaza many times, thus proving that there was considerable ill will between these families.  When Mirza Ghulam Murtaza died in 1876, in that same year or close to it, the extended family sued MGA’s brother and won, this case seems to have ran for 6-7 years. The shock struck MGA’s brother so hard that he died suddenly and at barely 50+ years old (1883). Mirza Sultan Ahmad, Mirza Imam ud Din’s soon to be son-in-law completed the payments to Mirza Imam ud Din, thus concluding this entire scenario in 1883, Mirza Sultan Ahmad was the family representative to the British government, there were no other Mirza’s employed by the British Government by 1883. By 1886, Mirza Imam Din became the spiritual leader of the “sweepers” they considered him the the second coming of Lal Beg, it seemed like an age wherein “non-profits” or “peerism” was a booming business, nonetheless, his religion was called “the-sweepers” and they were mistakenly considered as Ahmadis by the British Government and Dr. Griswold, who wrote the first independent study on Ahmadiyya. By 1888, MGA started another controversy in the family as he requested Mirza Ahmad Baig’s daughter for marriage (Muhammadi Begum) in exchange for the land rights of MGA’s cousin (Mirza Ghulam Hussain), who had been missing for 25 years, he was married to the older sister of Mirza Ahmad Baig.  Also, remember, MGA’s only surviving eldest sister was also married to an older brother of Mirza Ahmad Baig, she also sided with the rest of the family in opposing this marriage.

He seems to have had 2 grandsons, Mirza Aziz Ahmad and Mirza Rashid Ahmad.

“””in the name Allah the beneficient and the merciful. Stated to me by walda sahiba (mother of the author) that once , at the young age hazrat masih e moud went to receive pension of his father, when hazrat sahib (Mgaq) received the pension , he was chased and tracked by Mirza imamuddin who instead of bringing hazrat sahib to Qadiyan, lured him and took him from one place to other till the whole amount of pension was spent up. Then Imamuddin left hazrat sahib. Feeling regretted, hazrat sahib went to Sialkot instead of coming back to home. He got a job in the court of Deputy Commissioner Sialkot, on a very meagre amount as his father also desired him to get a job. Hazrat sahib remained there for some time till his mother got ill and he was called home by the grand father. At Amritsar He was received by a messenger from Qadiyan who told him that his mother had died.””” 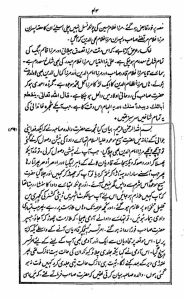 Another case of a one-sided story. Dard tells us (without giving any reference) that Imam Din seems to have hired someone to kill MGA’s father, (see Dard, page 22).

Somehow, Mirza Imam Din and MGA’s father both owned a piece of land that Mirza Imam Din had built a wall in an attempt to block. MGA knew this all along, and he purposely dragged out the case, he had worked in the courts in his youth and fad fought cases for his families land for years and years, in some cases, MGA was even above the law. See Dard, chapter 67.

An interesting quote from Malfuzat about the case of the Wall
In this entry from Malfuzat, MGA claims that this entire case was predicted by the words of Muhammad (saw), it is as follows:

“””Mirza Imamuddin and some other cousins, and co owners of ancestral property of Mirza sb Qadiani , had constructed a wall between MGA’s house and Masjid  (most likely masjid aqsa), Mirza sb approached the court for remedy. The court allowed his appeal and the wall was demolished accordingly.

Commenting on this order of the court, Mirza sb said we were kept under siege for 2 1/2 years by the opponents and the news of demolition of this wall was given by Rasool Karim Sallallaho alaihi wasallam in his ahadis. “””” (MALFOOZAT PAGE 532 , 15 August, 1901)

MGA had a dream about the wife of Imam ud Din wherein he called her a prostitute. This was inserted into Tadhkirah in 1935. From the diary of MGA.

Who is Mirza Rashid Ahmad?

The grandson of Mirza Aziz Ahmad has died